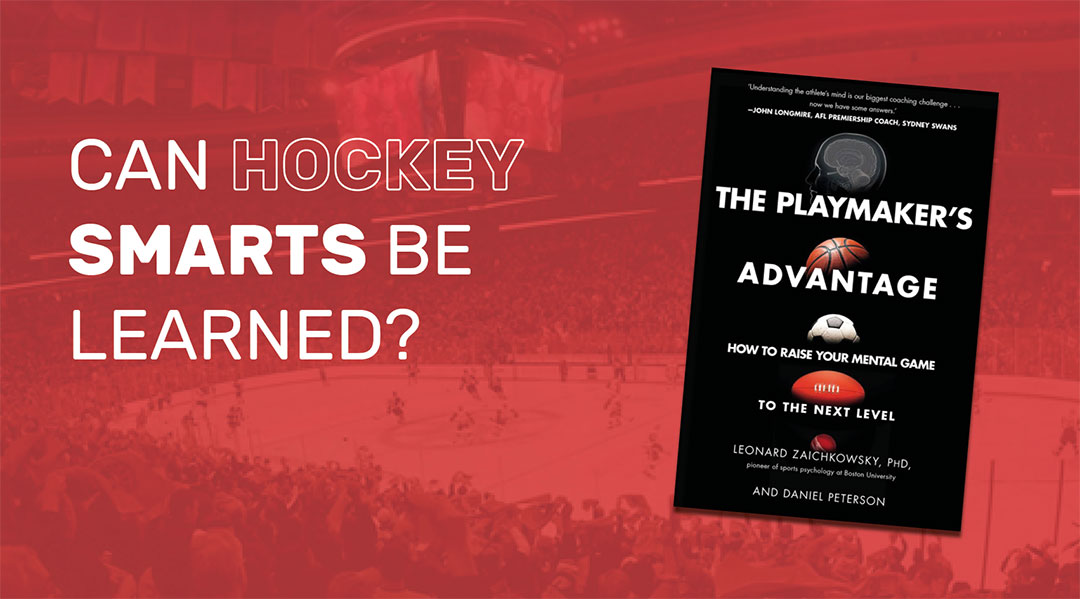 I recently published a book, called “The Playmakers Advantage” (2018) where I made the argument that elite athlete development and expert performance under pressure can only be obtained through what Professor Anders Ericsson called deliberate practice.  The notion that great hockey players of the past and present such as Wayne Gretzky, Bobby Orr, Jaromir Jagr, Leon Draisaitl, David Pastrnak, Sidney Crosby, and Jennifer Botterill (4 time Olympic medalist) were somehow born with athletic hockey genes to be the best in the world is now definitively regarded as  a myth. David Epstein’s research and wonderful book, “The Sports Gene”, also helped put the genetic argument to rest.

It is interesting that back in May of 2007, nearly 13 years ago, WIRED Magazine, published an article entitled, “Wayne Gretzky-Style 'Field Sense' May Be Teachable”.  It was an era when hockey executives, coaches, media reporters, and certainly fans, believed Gretzky had a genetic “gift”.  The writer for WIRED, after  interviewing prominent sport scientists such as Dr. Peter Vint of the U.S. Olympic Committee, Dr. Damian Farrow, of the Australian Institute of Sport, amongst others concluded that anticipation, rapid decision making, and flawless execution are brain functions that could in fact be taught to athletes.

Although I just missed interviewing Gretzky for my book, I located some interesting quotes from him.  In his autobiography, “The Great One” explained to author, Rick Reilly, “Some say I have a ‘sixth sense’. . .Baloney.  I’ve just learned to guess what’s going to happen next.  It’s anticipation.  It not God-give, it’s Wally-given”. Wally of course was Gretzky’s father Walter who taught Wayne the “thinking part” of hockey, including the wonderful answer to the question, “Where do you skate to?”  Answer: “To where the puck is going, not to where it has been”.

Sidney Crosby of the Pittsburgh Penguins has been the heir apparent to Wayne Gretzky  as hockey’s “intelligent player”.  I interviewed Sid extensively for my book but this year I  have been fortunate to consult with the Pittsburgh Penguins and see for myself his command of important perceptual and cognitive skills or “hockey intelligence”. Not many NHL players have Sid the Kid’s type of self-awareness, situational awareness, focus of attention (broad and narrow), impulse control, rapid recall, reaction time, creativity, rapid decision-making, and flawless execution of skills. Like Gretzky, Sidney Crosby developed his sporting intelligence from a young age.  He played a variety of individual and team sports, explaining to me there was something to be learned from all these sports when it came to strategies and decision-making. Skills learned in baseball, soccer, lacrosse, all transferred to hockey.

So how do we train perceptual and cognitive skills in order to be a better hockey player?  As Dr. Ericsson so eloquently stated, “you have to train in the right way”, that is,  engage in “Deliberate Practice”.  Mindless hours of skating, shooting the puck, or stick-handling through cones will not be sufficient.  Deliberate practice is a highly structured activity, designed to improve performance. This form of practice for both physical and cognitive skills exists on a  sliding scale between game competition and pure play. It is designed to overcome weaknesses, requires a lot of effort and may not always be enjoyable.

A number of years ago Dr. Jack Blatherwick, a physiologist and hockey coach from Minnesota came up with a training concept he called “over speed” training.  He pushed hockey players of all ages and abilities to do drills at the highest possible speeds.  It was o.k. to fall down or make mistakes, but push yourself to the limits and your nervous system will adapt.  I borrowed this concept and called it “over speed training for the brain”.  We want to train our players to execute skills in small, tight areas on the rink, thereby reducing time and space.  Yes, mistakes will be made, but once again nervous system adaptation will take place.

Perhaps the single most effective way for coaches to improve the thinking skills of athletes is to spend more time asking them good challenging questions, rather than simply telling them what to do.  Yes, telling players what to do is efficient and that’s what today’s coaches learned from their “old school” coaches/teachers. Scream instructions!   But the best coaches I have ever worked with across all team sports, challenge their players with questions. For example,  “What would you do if you saw this forecheck”?  Who should you make this outlet pass to”?  Questions like this require the athlete to “think”.

Breakthroughs in the development of technology to better understand how the athlete’s brain functions, stores information, executes skills, and speeds up learning has also helped us develop better hockey training methods. For example, we now have simple devices and apps that can train heart rate variability, thus enabling an athlete to better understand and self-regulate the stressors in their life. Ten years ago I introduced the Neurotracker (Cognisens Athletics) to the Vancouver Canucks and the NHL, so that players could prime their brain by engaging in Multiple Object Tracking (MOT).  At the time many considered the Neurotracker as simply a fad, a gadget, and scoffed at the idea that it could train important hockey skills. But, today it is used in many sports to provide overspeed training for the brain. The technology of temporal visual occlusion has been well developed in the sport of baseball and tennis to help athletes recognize pitches in baseball, and serves in tennis.  I suspect this technology will arrive shortly in hockey in some form. And of course we now have the wonderful virtual reality (VR) technology developed by Sense Arena. The fact that Sense Arena technology can measure and train both perceptual/cognitive skills as well as technical hockey skills is an advancement not seen before in the preparation of hockey players.

Dr. Len Zaichkowsky is the chairman of the Scientific board of advisors to Sense Arena, Virtual Reality based hockey training platform helping players improving reading the game and making rapid, correct decisions.

We welcome Brian Daccord on the team as the Goaltending Advisor.

Sense Arena for Player on Oculus is Finally Here

Practice makes perfect. Get thousands of reps off the ice with VR training.